* In case of any delay in receiving the OTP, you may verify it later. Please proceed without verification.

Your mobile number is not registered with us. Please register your mobile no.

Enter your City name or Pincode

Gyalshing is the capital of district of West Sikkim. Gyalshing is also known as Geyzing. The name Gyalshing means the King’s garden. This is a busting town and main transit point to various tourists destinations of the region. It is located 117 km away from Gangtok. The town is connected to the capital Gangtok by a metalled road. The town is situated 823 meters above sea level. The Nepalis mainly constitutes the population of Gyalshing.

Gyalshing has a hospital, a government college and an English medium convert school. The Tashi Gang hotel, the only 3 star hotel of the district is owned by Bollywood actor Danny Denzongpa.

Gylashing or Geyzing has many utility services for the people residing here. The postal services are provided by the Indian Postal Service and the electricity services by the Power & Electricity Department of Sikkim Government. There are also many leading telecommunication networks prevalent in Gyalshing. Some fo the banks located in Geyzing are:

Gyalshing, capital town  of West Sikkim district has many tourist places for tourists to look forward to. These tourist places include historical ruins and naturally beautiful hot springs as well as beautiful towns. Gyalshing is a busting town and main transit point to various tourists destinations of the region. Some of the tourist places are:

Rabdanste Gyalsing was the second capital of Sikkim after Yuksom and served as the same for a span of around fifty years till the year 1814 AD. The Rabdanste palace was located at a distance of few kms from the Gyalsing town.

The King of Sikkim rules the country land from this palace. At present, the palace is in ruins and lies hidden from the main road. It can be approached through a footpath which branches off from the road just below the Pemayangtse monastery.

It is a ancient holy town of Sikkim built in the year 1642 and is located in West Sikkim district. It is located around 40 kms from Geyzing and was the ancient capital of Sikkim.

It is situated at an elevation of 1780 meters above sea level and is famous for the trekking routes. The term ‘Yuksom’ literally means the ‘meeting place of the three Lamas’ in reference to the coronation ceremony by the three notable Lamas.

This place is the birthplace of Sikkim’s Buddhist civilization and has been a famous trekking point for the tourists.

These hot springs are located about 25 kms from Gyalsing near Reshi on the Rangeet River. The water of these hot springs has medicinal value and tourists come to bathe in the waters. The springs are considered to be holy as one of the four holy caves is located here. The holy cave is called Kasodang Phu or the ‘cave of the occult fairies’ and lies on the south of the four cardinal points.

Khecheopalri Lake and Sangay Waterfall are also some of the important place of Gyalshing. The pleasant weather, beautiful scenery in the background and various tourist spots make it a perfect place for trekking. The town is base for trekking for the Himalayas and professional expeditions to mount Kanchenjunga.

The town of Gyalshing has a number of religious tourist places which includes mainly monasteries preaching Buddhism. These monasteries has a large number of followers from the town and across the state and they also attract tourists from far and wide. 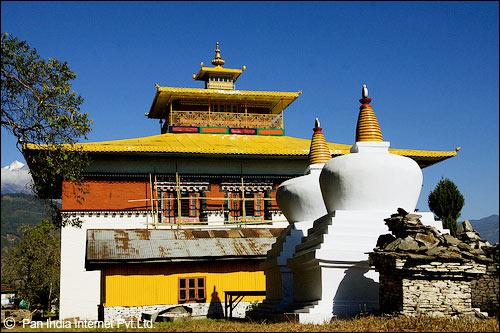 This is one of the sacred monasteries of Sikkim. It was built in 1717 by Ngadak Sempa Chombo. It is located around 16 kms away from Yuksam and around 40 kms from Gyalsing. The monastery is built on the top of a hill between the Rathong and Rangit River. Initially, only a small Lhakhang was built by Ngadak Sempa Chempo in the 17th century.

The main monastery was built by Pedi Wangmo during the reign of Chakdor Namgyal and statues of that time still exist in the monastery. The monastery has a holy ‘chorten’ (stupa) known by the name of ‘Thong-Wa-Rang-Dol’ which literally means ‘saviors by mere sight’. It is believed that a single glimpse of the stupas washes away the sins of the people.

According to the Buddhist scriptures, Guru Padma Sambhava sanctified the lands of Sikkim at this point during the 8th century. One can see ‘manis’ or stone plates in the monastery. There is Buddhist mantras engraved in these stone plates. The main sanctum sanctorum of the monastery is surrounded by old structures, stupas, relics and stone plates. The stupas are carved with the inscriptions of Sikkim Chongyal and lamas. The Tashiding Monastery is famous for the celebration of Bumchu, a festival celebrated by the people here.

There is also the Pemyangtse Monastery which was built in the year 1640.

Are you a Business Owner?

Add the products or services you offer